Is Joel Klein for Real? 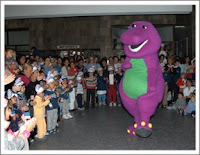 November 11, 2007 (GBN News): A Department of Education spokesperson today categorically denied reports that Schools Chancellor Joel Klein is actually a fictional character. The denial was apparently in response to rumors that have long been circulating, but have multiplied after the release this week of Mr. Klein’s signature accountability measure, the new school report cards.

GBN News spoke to Dr. Peter Gould, a professor at the New York College of Communications, about the rumors and subsequent denial. “They can deny it all they want,” Dr. Gould said. “But there is no evidence that this guy really exists. Why do you think they’ve never come up with a contract for him?”

When asked how a fictional character could possibly run a real entity such as the DOE, the professor said, “Mayor Bloomberg fancies himself a patron of the arts. He must have found some aspiring writer who thinks he’s the second coming of Franz Kafka. Bloomberg probably said he’d pay him to make up a situation so nightmarish that parents and teachers would beg for anything, even charter schools or privatization, just to restore some semblance of sanity.”

“Think about it,” he continued. “Report cards where failing schools get A’s and high performing schools get F’s, perpetual reorganizations, hundreds of teachers languishing in rubber rooms, the cell phone ban - no real person could pull off all of that. The Klein character is just a fictitious device employed to put a bizarre literary scenario into practice.”

The question was raised as to how Mr. Klein could be seen so frequently at schools and public meetings if he is not real. “Any undergraduate communications major could pull that one off,” he answered. “You just hire an actor and put him in a ‘Joel Klein’ costume. It’s kind of like those giant Barney characters you see at kids’ parties, only more annoying.”

In other news, a high school student in Queens told GBN News that she is challenging her failing grade this semester. The student, who wishes to remain anonymous at present, had raised her average from 51 to 59 since last semester. She is demanding that based on the fifteen per cent increase in her average, her grade should be changed to at least a “B”.
Posted by Gary Babad at 11/11/2007 07:05:00 PM