The NY Times calls for ditching the school grades 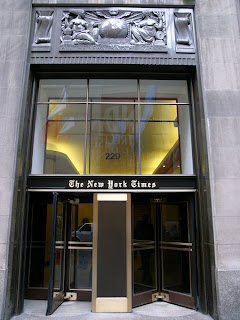 Today, the editorial page of the NY Times comes out squarely against the new school grades.

The paper calls on the Mayor to “ditch the simplistic and counterproductive A through F rating system."

The editorial points out that "a single letter grade that does not convey the full weight of this approach and lends itself to tabloid headlines instead of a real look at a school’s problems.”

It also notes how the formula is statistically untenable, as it is based on one year’s test score gains, and that “a high-performing school was given an F and several low-performing schools — those actually on the state’s failing list — were given A’s and B’s.”

This editorial is especially notable as the Times very rarely comments on the radical changes going on our schools.

Today's City section also has an excellent oped by parents at a school that received a "D" --Central Park East I:

“Central Park East I and other “failing” well-regarded schools like it have become collateral damage in a clash of competing educational philosophies: waste time and energy training children to do well on a test and get the grade; or educate them to be creative in their problem-solving, but fail on the Department of Education’s report card. That’s just not an acceptable choice.

It’s not Central Park East I that deserves the D, it’s the educational specialists who can’t or won’t accept that testing young children is not the best way to judge how well an elementary school is doing.

Yes, we’re angry about the bureaucrats giving us a failing grade, but we’ll wear our scarlet letter — our D — with pride if it’s the price we have to pay to stand up and fight for a great education for our children.”

See also the many letters published in the NY Times yesterday, protesting the concept and the formulation of these grades.