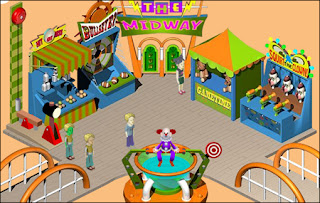 A public elementary school in that has requested it remain anonymous received an unexpected windfall on Saturday during their annual fall fair, netting thousands of extra dollars for their PTA because of an unusual attraction. The game was Dunk-the-Clown – with a difference.

As is customary, a clown sitting on a chair hurled taunts and insults at the fair-goers, while they took turns throwing balls at him, attempting to dunk him in the basin of water below. But the clown was Joel I. Klein, NYC Schools Chancellor.

“Your school gets an F!” Mr. Klein shouted.

Or was it Mr. Klein? A label across his chest proclaimed he was, but a woman in the crowd revealed, “It’s actually Joe Ruiz, president of our PTA. Our school got an undeserved bad grade on the school report cards last week. Our principal and teachers were pretty demoralized, so people around here are a little angry. We know how hard our teachers work, and frankly, we’d all like to take a shot at Klein.”

From his perch atop the game, Mr. Ruiz shouted a steady stream of insults. Some were about the marked increase in standardized testing in the schools. When a group of students stepped up to the plate, he shouted, “I’m going to give you more tests! More tests! More!”

When a parent took aim, Mr. Ruiz addressed the issue of the cell phone ban. Referring to a statement made repeatedly by Mayor Michael R. Bloomberg, that parents want their children to carry cell phones to school merely so they can ask them what they want for dinner, Mr. Ruiz shouted, “What do you want, chicken or fish?”

Notably, the principal of the school did not hurl a ball, though she smiled appreciatively at those who did. As she stood on the sidelines, Mr. Ruiz taunted her with comments about the repeated reorganizations of the schools. “I’m replacing the districts with regions! No! I’ve decided to do away with the regions! Ha! Ha! Who’s going to help you now?

The crowd, which appeared unruly, attracted the attention of a uniformed police officer patrolling the neighborhood, though when the officer saw what was going on, he joined the line himself. “I’d like a piece of this guy,” he said. “Last winter my daughter’s bus route got cancelled. She waited hours in the cold for a school bus that never came, and now, to get to school, she has to cross a busy highway by herself.”

A quick sampling of those waiting take shots at the “Chancellor” revealed that many were not from the school hosting the fair.

“My daughter goes to high school in the ,” said one man. “She has to take 2 subways, so she checks in with us each leg of the trip. But last spring, the DOE confiscated her cell phone. It took us 3 days to get it back. I had to lose a day of work to go demand it.”

Behind him, another woman said, “My son is in third grade at a neighboring school. This week his teacher announced she just can’t take it anymore. She’s accepted a job in . Twice the pay for a fraction of the aggravation.”

By the end of the day, the school hosting the fair had netted over $10,000 at the dunking game.

Mr. Bloomberg, reached at a $5,000-a-plate fundraising dinner for the private school his daughter had attended, was asked his reaction to the outpouring of anger at his schools chancellor. “Running a school system is not a popularity contest,” he said curtly. “You get a few disgruntled parents out there and they do a lot of whining.”

But Mr. Ruiz dismissed Mr. Bloomberg’s comment. “A few?” he said, fanning a fat stack of bills. “Ten thousand dollars at a dollar a pop? I’d call that a lot of angry parents. Maybe I should call the mayor’s cell phone and ask him what he’s eating there at his black-tie dinner. Chicken? Or crow?"