How the school grading system is a fiasco 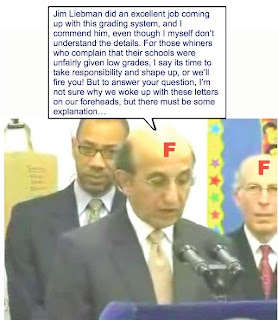 Check out my oped in today’s Daily News, calling the new school grading system a “fiasco” and pointing out the reasons why.

It ends this way:


The new grades are merely another simplistic, misleading attempt by this administration to look tough - and evade its duty to improve our schools.

(Click on the picture to the right to enlarge it.)

Not surprisingly, the NY Post ran an oped in support the new grades– written by a charter school operator. Interesting that DOE could apparently find no one involved with a traditional public school to back them up.

What’s especially ironic is that the Post also ran an article on p.2 revealing that charter schools have been exempted from receiving grades – supposedly because the DOE can’t require their parents and staff to fill out the surveys.

The Daily News ran an excellent article, entitled “How a good school fails.”It looked at PS 35 on Staten Island, in which 49% of the students live in poverty, yet 86% passed last year's state reading test, and 98% the state math test. Citiwide, this school was in the 91st percentile in reading, and 97th in math. But it got an “F”.

How can this be so? Because last year, only 35% of its students improved their scores over the year before in reading, and only 23% in math.

How absurd! As my oped points out, between 34-80% of the annual fluctuations in a school's test scores are random, or based on one-time events alone.

So if a school was on the state failing list, it was far more likely to get an A than a D or F. The distribution of grades of schools on the failing list was remarkably similar to schools citywide: 19% As, 36% Bs, 31% Cs, 9% Ds, and 4% Fs. (According to the DOE press release, 23% of schools overall received As, 38% Bs, 25% Cs, 8% Ds, and 4% Fs.)
, a teacher at Bergtraum HS analyzed the grades in terms of the quality reviews that every school received last year – a more holistic approach:

Here is a quote from the NY Times today from Emily Horowitz, a parent at Muscota school, which unfairly received an “F”:

“I find the methodology to be confusing, problematic and flawed” … Ms. Horowitz said that the grade “doesn’t mean anything” to her, and that parents were planning a rally this morning to “celebrate our school.”

Hurray for Emily and the parents at her school! See our previous posting of individuals who should be celebrated for standing up for reason during these difficult times,

Please nominate others for our Profiles in Courage series by leaving a comment here.

Update: see this NY1 story about the principal and parents at Muscota.

Leonie,
What's the source for the 34-80% random fluctuation in year-to-year changes in a school's test scores?

There's no source you can point to and say "ah there it is lets fix it". It is just a mathematical thing. The tests have to be written new each year and so fluctuations occur. It's like how you might be able to complete a crossword puzzle or sudoku one day and be stumped the next day.

I wish I could have been at the Muscoda rally. Go Muscoda!

Kane and Staiger have written alot on the random nature of annual variations in test score results -- the smaller the school, by the way, the more random the annual variation.