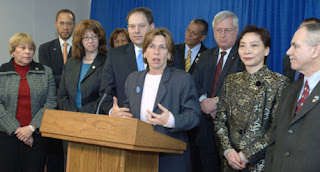 On Tuesday, we had a press conference in Albany to announce the introduction of the Nolan/Lancman class size reduction bill, A. 6063. Nearly every Assembly member from NYC is now a co-sponsor. The bill would require that at least 25% of the extra state aid coming to our schools be used to reduce class size in all grades, to be phased in over four years, and that the city’s capital plan for schools be amended to provide the additional space necessary.
WNYC ran a short piece about the bill; there were longer articles in the NY Sun , Staten Island Advance and Legislative Gazette. The objective is to galvanize enough support so that these provisions are included in each house’s separate budget bills , and then in the final budget, set for April 1 and negotiated as usual by three men in a room – Speaker Silver, Senate Majority Leader Bruno and Gov. Spitzer.

This is only a month away, and we need to keep the pressure on until then. We are helped by the fact that the Chancellor appears to have lost all credibility with the Legislature.

That same day, there were hearings on the Education budget – and Chancellor Klein was grilled for several hours by NYC Senators and Assembly members. Senators Diaz, Sabini, and Lafayette as well as Assembly Education Chair Nolan and Assembly member Diaz Jr. were extremely critical about the administration'­s record on class size, dropout rates, their slowness in relieving overcrowding and building new schools, the bus route fiasco and their propensity to make up statistics to make it appear as though their reforms have been successful.

What was astonishing to me were not so much these specific critiques – which were right on the money – but the fact that several Legislators said they had tried to meet with Klein for the last six years and he had so far cancelled every appointment; and these are the people who have the future of Mayoral control in their hands!

Senator Diaz had led the charge a few weeks ago when he asked Bloomberg to fire Klein and Walcott. Here is an excerpt from his letter:

Mr. Mayor, you are far away from being "The Education Mayor". I 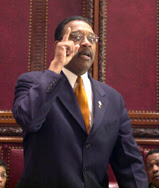 am afraid that if you continue to listen to the advice of Deputy Mayor Dennis Walcott and Chancellor Klein, your legacy will be the "The Education Mess, Confusion and Chaos Mayor" instead of "The Education Mayor". In order to protect our children’s education, stop parents’ anguish, fix the chaos in the system, and for you to avoid further embarrassment, Dennis Walcott and Chancellor Klein should resign or your should fire them.

When Klein claimed in response that parents in the Bronx were happy with several of his reforms, including the new small schools, Diaz responded that he clearly had not had contact with real Bronx parents, or else he would know how unhappy they really are.

Even long time Albany insiders were astonished at the intensity of Klein’s reception; a Daily News article gives a good flavor of the hearings. It starts this way:

“In his two hours before a State legislative committee yesterday, Schools Chancellor Joel Klein tried to accentuate the positive - but the lawmakers weren't buying it. For every success story

Klein spouted, legislators had a parallel horror story, questioning whether mayoral control of schools was working.”

And there's a great video clip from NY1 that also mentions our bill. It begins: