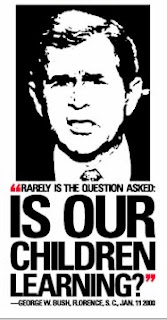 March 24, 2007 (GBN News): Due to the enormous pre-sale interest in the upcoming Parker Brothers game, “Children First: A Game of Irony”, based on the NYC school system, the company announced today that it is releasing a national version of the game. It will be called simply, “NCLB: The Game”, although in deference to President Bush, some are already calling it, “Is Our Children Learning?”

The new version will seem familiar to those who know the original game. It will feature many of the same lovable characters: Mayor Bloomberg and Chancellor Klein appear like apparitions on the board as they tout their “successes” around the country, and entire school systems go bankrupt as they hire high priced consultants like Alvarez and Marsal.

Players are all wealthy non-educators. They land on squares representing U.S cities, where they endeavor to wrest the local school systems from their elected Boards. Players are then expected to seek assistance from private consulting companies such as Edison Schools and IBM, to whom they pay a large part of their budgets for no-bid contracts. The Rules set numerous “standards” regarding the performance of the cities’ schools. As they pass “Go”, players try to collect enough money to meet these mandates. However, they cannot collect unless their school districts already meet the standards. If they do not, they may then draw “Blame” cards, with which they attempt to place responsibility on anyone but themselves.

The players wheel and deal, and must incessantly reorganize their cities’ school systems to divert attention away from their failures. While the game is challenging, it goes on until all players end up with a final score that “meets rigorous standards”. Thus, the game could go on without end. On the other hand, none of the players actually loses. The only losers appear to be the children themselves.
Posted by Gary Babad at 3/24/2007 09:11:00 PM

A new card for the game: Joel Klein's newly made up "contract", available in this article:

The "Who Are You Kidding??" Award Goes To: Joel Klein, New York City Board of Education Pretender

Anyone who gets this card can be called "Chancellor" and then can make no-bid contracts for any amount above $10 million and take a 20% kickback. If you do not make a deal for a no-bid contract after going around the board then your kickback goes to a needy school to lower class size.