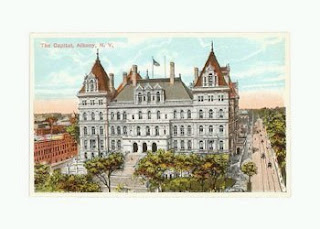 Tuesday, I went on the lobbying trip to Albany with the Chancellor's Parents Advisory Panel, the UFT and the Principals' union. At stake is the final shape of the Education budget proposed by Gov. Eliot Spitzer. The Assembly and Senate have each passed their own "one-house" budget bills from which the final legislative/executive compromise will be hammered.

The Assembly bill has somewhat weak language which would require Mayor Bloomberg to "plan" to bring student-teacher ratios into line with those statewide. This has been presented as "class size" language, but it's not. It's an exception any good lawyer, and most bad ones, could drive a truck through. Even worse, the Senate budget bill is silent on class size, notwithstanding (so far empty) promises, people tell me, from GOP Senators Padavan and Maltese to insert class size language into the Senate Bill.

I have a lot more to write about -- some of which will appear on Daily Gotham -- but, from my point of view the big news is that we now know the names of the key Assembly budget negotiators. We can write them and ask them for class size language, and for language requiring the Mayor to spend this money only with the approval of the NYC Council.

The Assembly negotiators are as follows:

I suggest you call or email these Assembly members to ask them for their support for smaller classes. Otherwise, Mayor Bloomberg will have the freedom to blow the added billions on no-bid contracts with his pals.
Posted by Daniel Millstone at 3/14/2007 10:47:00 AM