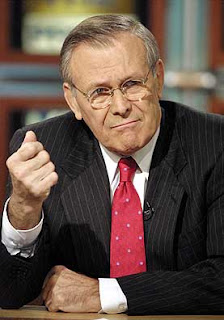 March 14, 2007 (GBN News): Stung by criticism of cuts in school bus service, New York City Schools Chancellor Joel Klein announced today that former Defense Secretary Donald Rumsfeld will be the new head of the DOE's embattled Office of Pupil Transportation. Klein cited Rumsfeld's experience in parrying press and public allegations of insufficient planning and resources. The former Defense Secretary's legendary PR abilities were immediately tested. In a press conference, the new transportation chief was asked how he felt about children being denied bus service due to the recent cuts. In a remark eerily reminiscent of a statement he once made about Iraq, Rumsfeld responded, "You go to school with the buses you have, not the buses you'd like to have."

In a related story, Secretary of Education Margaret Spellings announced today that the Education Department will be looking into charges that the recent school bus cuts may be in violation of the No Child Left Behind act. She said in a statement that the Department was responding to reports that hundreds, if not thousands of children were "left behind" in the first two days of the new bus schedules.

as written by Gary Babad