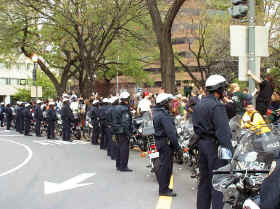 Dushanbe, Tajikistan, March 30 (GBN News): Numerous protests erupted around the country of Tajikistan today over the report that outgoing NY City Schools Chancellor Joel Klein would shortly be assuming the presidency of that country. As reported yesterday by GBN News, the Tajik President, Emomali Rakhmon, will become Schools Chancellor in New York, while Mr. Klein takes over the position of Tajik strongman. While reaction in New York remained muted, the Tajik people were not hesitant to make their feelings known.

Opposition appeared to center around Mr. Klein’s reputation for secrecy and his penchant for imposing his will without reaching for input from the people he serves. While the outgoing President, Mr. Rakhmon, is known for capricious and even ruthless decrees, people here at least seem to feel that he is free of pretense.

One Tajik, who refused to be quoted by name out of fear of repercussions from Mr. Klein, told GBN News, “Rakhmon may be a ruthless dictator, but everyone knows it and he’s right up front with it. But that Klein: He goes all over the city promising to listen when he’s already made up his mind. Then there are those CEC’s. You think our elections are a farce! At least we all get to vote.”

Another citizen quoted Abraham Lincoln: “I should prefer to live somewhere where despotism can be taken pure, without the base alloy of hypocrisy”. This woman went on to say, “I thought we lived in such a place. But now, to have Klein coming in like this … I’ll take the Soviets back any day!”

Amid the fear and confusion, some Tajiks preferred to make the best of the situation. At the Education Ministry, people lined up around the block to apply for a rumored $150,000 a year position of “Chief Family Engagement Officer”. And the country’s game manufacturer was already negotiating with Parker Brothers to develop a new game based on Mr. Klein’s regime. Still, the wide scope and intensity of the protests suggest that most people here feel New York got the better end of this deal.