Bloomberg's flaws, according to the NY Post and Times 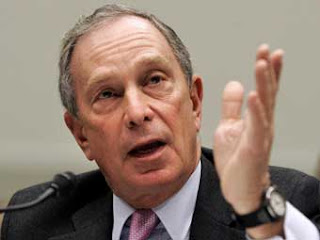 On Thursday, the Mayor flew off to Miami without visiting the Bronx families who lost eight of their children to fire. Instead, they sent Chancellor Klein.

After a lot of negative comment, Bloomberg flew back later that evening. Here is an excerpt from the AP article that was syndicated throughout the country, including the Sun:

Asked by reporters in Miami why he did not cancel his trip because of the fire, Mr. Bloomberg said he had other things to do, and grew testy after the questions persisted. He would not say when he planned to return to New York City, but ended up flying back late that night.

On Saturday, the NY Post published an editorial concluding that this was just the latest indication of how Bloomberg “is a deeply flawed mayor.”

"Time and again over the last five-plus years, Bloomberg has demonstrated an appalling inability to connect with the people of New York in times of crisis. …His enemies charge that Bloomberg cares about process, and not people - and you know what? The allegations resonate. Last month, it was his refusal to lift alternate side of the street parking after a brutal ice storm. Whether it was last summer's Con Ed power outage, the Staten Island Ferry tragedy - or even last month's school-bus fiasco - Mike has come across as aloof and arrogant."

On Sunday, the Daily News added its two cents on the Mayor's missteps, in an article entitled "Mike's harsh winter."

The NY Times doesn’t deign to notice the Mayor's flaws on its editorial page – in which city politics or our schools hardly exist as a concern anymore – but ran an article on Sunday which, while pointing out some of the same examples, also claims that he has learned from his mistakes.

The headline as written by one of many NY Times' relentless boosters among the editors: Bloomberg, Criticized Again for Response to a Crisis, Tries to Strike a Balance:

“….those very traits that have helped make him a popular mayor and the subject of cocktail-party presidential speculation have frequently caused him trouble in responding to the travails of ordinary New Yorkers, whether parking in a snowstorm, coping with a power failure lasting days or mourning the sudden loss of nine people, eight of them children….…. This winter, his administration set off an uproar among parents by upending children’s bus routes in the midst of a school year, a move he defended for days before conceding it might have been better handled. Many parents were already upset about the enforcement of a cellphone ban in schools that did not take into account their need to keep in touch with their children.

Then last month, he incensed New Yorkers by failing to suspend parking rules as a snowstorm iced in vehicles across the city. After telling New Yorkers to stop “griping” over the thousands of tickets that had been handed out, he abruptly canceled them. Mr. Bloomberg’s quick reversal of the parking tickets and his response to the brouhaha over his Miami trip suggest that he is hearing the message. Showing a new willingness to change direction in the midst of a choppy course, he testily defended his trip to reporters in Florida at first, then decided to come back that night.”

Bravo! I guess we all should congratulate Bloomberg on his willingness to listen to his large staff of PR managers, who are smart enough to read the papers and watch the local TV news.
Posted by Leonie Haimson at 3/10/2007 01:40:00 PM

The NY Post here adds to the case for the end of mayoral control of schools, or at least a dramatic overhaul. Public schools can only be improved through a partnership of parents, teachers and administrators working together. To most people outside of Tweed, that's obvious. But when the mayor refuses to engage parents and thinks reform means playing with organization charts, consulting studies and computer systems, then no real improvement is possible.

It's very encouraging, though, that the papers, indeed any of them, are beginning to notice that things are not what they seem in Mr. Bloomberg's world. For years, they seemed no to notice at all.

I'm frankly amazed that other mayors would go out of their way to emulate such a plainly ineffectual system, and that such successful politicians were unable or unwilling to find out what was really going on here.

For years, I've read education stories, particularly in the Times, that were glaringly inaccurate. It amazed me that reporters for arguably the best paper in the country couldn't be bothered to consult with a single teacher, any one of whom could have corrected the facts.