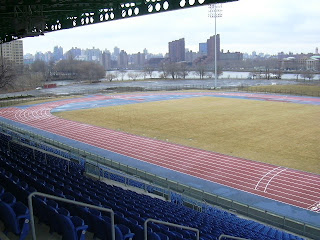 While parents were lobbying yesterday in Albany, the Mayor was in Washington testifying on US competitiveness at a conference where he bemoaned our declining prowess in finance, medicine, and science. The NY Times skipped the parents visit while providing the Mayor with the customary fawning coverage.

What neither he nor the Times mention in this discussion about competitiveness is the fact that on the Mayor's watch the performance of public school students in the Intel Science Talent Search has fallen off a cliff. Congressman Anthony Wiener brought this crisis to light on Monday. From an article in the NY Press:

The congressman pointed out that during the 2002-2003 school year, City students claimed 50 of the 300 semi-finalist spots, more than any other city. However, that number has seen a steady decline since 2002-2003. This year, just 18 semi-finalists from the City are moving on to the next round, 32 students less than five years ago.

But the biggest surprise in the Mayor's comments was his concern about inequality: “This society cannot go forward, the way we have been going forward, where the gap between the rich and the poor keeps growing”. Those familiar with the Mayor's plan to privatize playing fields on Randall's Island through an exclusive lease for 20 elite private schools have to chuckle at his new-found populism. His language is eerily similar to Daily News columnist Juan Gonzalez's description of that endeavor in his Oct 25th column:

There is no more disturbing example of the growing divide between the rich and the poor in this city than a plan the Bloomberg administration has hatched for upgrading and doubling the number of sports fields at Randall's Island Park.

For more info on the Randall's Island deal, including a link to the NY Times editorial condeming it, see East Harlem Preservation.
Posted by Patrick Sullivan at 3/14/2007 08:20:00 AM