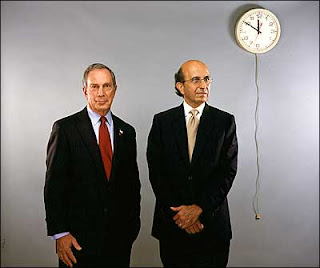 The poll showed that 73% of New York City voters approve of Mayor Bloomberg. And it also showed only 33% approve of Schools Chancellor Joel Klein, while 43% of voters disapprove of the job he is doing.

In a survey released on March 14, the Mayor's popularity was near his all-time high rating of 75% in January 2007. Voters overwhelmingly disapproved of the "Mayor's handling of the school bus schedule change" (by 62-12%). But apparently that fiasco was just a minor blip in the Mayor's continuing popularity among New York City voters.

In the survey released by Quinnipiac today, there was considerable information about how voters view the Mayor's and Chancellor Klein's stewardship of the public schools.

Only 19% of voters citywide are satisfied with the public schools; 64% are dissatisfied, including 63% of public school parents and 75% of black voters.

Chancellor Klein gets a resounding vote of no-confidence in this survey. Only 33% of voters approve of the job he is doing. As noted above, 43% disapprove. His disapproval ratings are highest among black voters (50%), in the Bronx (50%), in Brooklyn (48%), and among women voters (48%). The strongest disapproval rating--52%--is registered by parents of public school students. Chancellor Klein's highest popularity was recorded in February 2003 at 46%; his lowest was recorded in March 2007 at 33%.

On the subject of who should control the schools, only 31% say that it should be the mayor. 58% say that it should be an independent Board of Education. The groups that most strongly support an independent Board of Education are Blacks (66%), Democrats (64%), women (64%), voters in the Bronx (62%), and public school parents (61%).

Let's hope that Mayor Bloomberg reads the poll results. Nearly five years into mayoral control, the public is not satisfied with the public schools. They don't trust the Department of Education that he created. They want an independent Board of Education. Attention must be paid.

What's also interesting is how uniform the disapproval is among Republicans, Independents, Democrats, white, blacks and Hispanics -- and unusual unanimity of negative opinion within this highly diverse city.

Why do you think it is that people hold Mr. Klein to blame for the mismanagement and bad leadership of our schools, but don't hold Mr. Bloomberg accountable?

Daniel Millstone asks an interesting question: Why does the public hold Mr. Klein accountable for the condition of the public schools, but not Mayor Bloomberg. I am puzzled, too. After all, mayoral control was supposed to mean, "hold the mayor accountable," but so far the public is not doing this. Someone suggested to me that Mr. Bloomberg is teflon and Mr. Klein is a magnet. Or it may be that in time, if matters continue to spiral out of control, the public will begin to hold the mayor accountable. What is your guess?

I would say it's just that the general public doesn't yet understand how the Mayor is failing. For public school parents, 50% disapprove of his handling of the schools. In the business world, if 50% of your customers don't like your service, you don't stay in business very long. The Mayor has an excellent PR machine and the publishers of the major media outlets are sympathetic, if not good friends. But more and more the truth comes out. As Diane and others write the history of the schools in the Bloomberg era, the perception will align with reality.