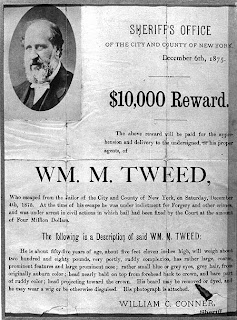 Another irony in the rich history of Boss Tweed is that he was eventually brought down by Samuel J. Tilden, a reform-minded chairman of the Democratic state committee, NY Governor and a Presidential candidate.

Samuel Tilden would have become President, having won the popular vote and more electoral votes as well, if not for a lot of political shenanigans.

And now, more than 100 years later, appears to be having his revenge, as top DoE officials are closing down the school named after him -- despite the protests of teachers, parents, students and elected leaders.

The determination of top officials at Tweed to eliminate Tilden HS flies in the face of a positive quality review of the school only a few months ago.

The review pointed out the how how the principal's "efforts and leadership have received enthusiastic support from students, teachers, parents and her administrative staff" and that English language learners achieved a passing rate on their Regents exams 25.3% above similar schools and 16.8% higher than schools across the City. Also notable is that the school is one of the few places that offers bilingual classes to Haitian students. An excerpt:

"From the principal, whose open-door policy welcomes students at all times, to teachers and security personnel, a culture that values knowing and respecting all students is immediately observable."

The small schools that will open up in its place are allowed to exclude all ELL and special education students for up to two years -- where will all these children go?

See also this NY Times column about the situation at Tilden HS, and the website of the school's defenders who are trying to save it from being eliminated.

An update from John Lawhead, Tilden HS teacher: On Tuesday (March 20) we had a free-lance writer who's on assignment from Voice. She attempted to interview the principal. Melody Meyers of the DOE communications office refused to give permission for the principal to talk.

Also check out John's testimony before the City Council here.