The Unkindest Cut of All 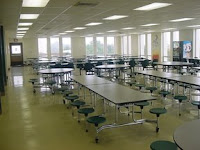 March 23, 2007 (GBN News): Flush with their success in saving $12,000,000 by cutting out numerous school bus routes in New York City, the corporate "turnaround" firm of Alvarez and Marsal has now aimed their sights at a new cost saving target: school lunches. Starting April 1, the traditional "lunch period" will be eliminated from all New York City schools, to be replaced by an as yet undisclosed academic activity period. In announcing the change, Schools Chancellor Joel Klein lauded the new plan, stating that not only would this move eliminate a cost-ineffective program that had never turned a profit, but would add time to the academic day and thus improve test scores.

Public Advocate Betsy Gotbaum, as well as numerous parent advocates immediately criticized the planned elimination of the lunch period. In response, Mayor Bloomberg, when reached for comment, held that "Schools are for learning, not for eating". He added that the elimination of lunch would also obviate the necessity of students carrying cell phones to school. "We all know that the only reason parents want their kids to have cell phones is to call and ask what they want for dinner. With no lunch period, they'll be so hungry they won't care what's for dinner."

In a related story, The White House announced today that in a last ditch effort to salvage Iraq, the Halliburton reconstruction contract would be taken over by Alvarez and Marsal. According to spokesman Tony Snow, "If we can't beat [the insurgents] militarily, we'll cut their transportation and starve them out."
Posted by Gary Babad at 3/23/2007 11:04:00 PM

I also have heard that all trips to the bathrom will be eliminated, and those who truly can not hold it in will be added to the roster of children staying the extra 37.5 minutes each day to allow them the time needed to relieve themselves (which should take about 27.5 minutes after waiting so long).

Oh wait, I think that already happens in my son's school!!

And according to the article, "ARIS Critics: IBM Responds", those bathroom trips will be tracked by computer.

You are good-you had me believing this for a while.

I also think Klein and Bloomberg would do these things.